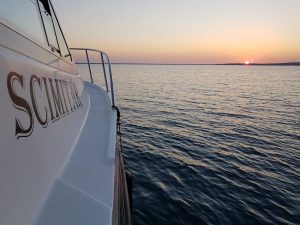 Portland in Dorset benefits from miles of coastline with a variety of different habitats from reefs to an abundance of historic shipwrecks. This variety and accessibility makes Dorset a paradise for divers at all levels and from our Portland base Scimitar diving is in the perfect location to exploit this natural bounty. The area is probably most famous for the extensive variety of wreckage scattered around the coast. There are wrecks suitable for all levels of diving from the beginner to the most experienced technical divers and the wrecks represent every historic watercraft. Old sailing vessels with precious cargos to relics of the two World Wars there really is something for everyone.

Scimitar is named after a Royal Navy fast attack training ship that operated from Portland Harbour. She is a South Boat 11m catamaran, renowned for speed and stability, commercially certified to carry 12 divers up to 60 miles off shore. She has twin 400 HP, Caterpillar engines, and cruises at 17 Knots.
For your comfort and convenience the boat is fitted with a hydraulic dive lift on the stern which means you are lifted out of the sea easily and safely.
Thorough safety briefings are given before departure and dive briefs given on arrival at the site. In addition to the safety equipment required by law, Scimitar has a defibrillator, extensive first aid kit and oxygen.

The first dive of this trip is to the M2 which sits at 32 metres. In 1927 HMS M2 became the worlds first undersea aircraft carrier – a submarine carrying a small two-seater seaplane in a watertight hangar. The seaplane, which had folding wings, was launched by catapult off a runway on the deck. When it landed near the sub, it was hoisted on board and into the hangar by a specially designed small crane.The M2s crew was proud of the speed with which it could launch the little floating plane. Rising to periscope depth, the submariners would check around for enemy ships, surface, open the hangar door and catapult the plane off on its flight. They were constantly trying to beat their own speed record.It was this speed which was to kill all the crew. The M2 dived at 10.11am during exercises off Portland on 26 January, 1932, and disappeared. On 29 January all hope was officially abandoned for the 60 crew aboard.It took eight days to find her. The first divers discovered that the hangar door was open with the plane still inside. The hangar had apparently been opened while she was still underwater. A salvage operation retrieved the plane, but after 11 months and a total of 1500 dives involving 26 Royal Navy divers, the Admiralty had to admit defeat over the submarine. On 8 December, 1932, the M2 was left to rest forever on the seabed off Portland.

The second dive is in the harbour on the wreck of the Countess of Erne this wreck sits at 16 metres. This is a paddle steamer built at the end of the 1800s. Towards the end of its life it was used as a barge to ferry coal out to the battleships moored within the harbour. In 1935 it was blown from its moorings and ended up wrecked against the breakwater wall where it remains. It sits upright on a silty seabed with empty holds that you can swim in and out off. Excellent training site

The trip cost is for the charter dive boat only. You are required to bring the following:

Please note: the deposit is non-refundable unless cancelled by the Skipper.

BACK TO UK TRIPS

The event is finished.

This website uses cookies to improve your experience while you navigate through the website. Out of these cookies, the cookies that are categorized as necessary are stored on your browser as they are essential for the working of basic functionalities of the website. We also use third-party cookies that help us analyze and understand how you use this website. These cookies will be stored in your browser only with your consent. You also have the option to opt-out of these cookies. But opting out of some of these cookies may have an effect on your browsing experience.
Necessary Always Enabled
Necessary cookies are absolutely essential for the website to function properly. This category only includes cookies that ensures basic functionalities and security features of the website. These cookies do not store any personal information.
Non-necessary
Any cookies that may not be particularly necessary for the website to function and is used specifically to collect user personal data via analytics, ads, other embedded contents are termed as non-necessary cookies. It is mandatory to procure user consent prior to running these cookies on your website.
SAVE & ACCEPT