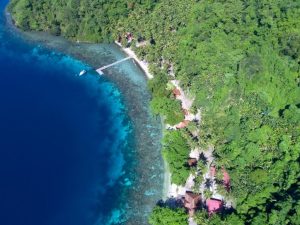 South Halmahera as part of the Moluccas is truly a diving paradise off the beaten track. Sali Bay Resort, being the only dive resort in the South Halmehera, clearly offers the advantage of being able to still explore new dive sites. The brand new Sali Bay 4-star resort is located in a protected bay in the Northern part of Maluku (Moluccas), in the Sea of Halmahera – Indonesia. This modern resort is perfectly located for divers, snorkellers and nature enthusiasts looking to explore this remote location at the heart of the Coral Triangle.

Sali Bay – Twelve individual villas line the palm-fringed beach, all a few steps from the sea. The spacious, air-conditioned wooden units include double or twin beds, en-suite bathroom, camera table and small fridge. The wide private verandas are furnished with sun beds, table and chairs. Located in the middle of the resort, facilities include a restaurant and bar serving international and local cuisine to a very high standard. The resort has a small swimming pool and nearby is an intimate spa which offers traditional Indonesian treatments. White Sands Beach Resort Lembeh As the name says, this is the only resort on the Lembeh which is located on a white sand beach, although the diving is on black sand! This is a new resort run by Eco divers and offers a very high standard of accommodation and cuisine. The ocean-front cottages are spacious with wonderful sea-viewing windows, just on the side of your bed. The bathroom, with semi-open shower, gives the right touch to your tropical holiday. The highly- trained chefs will ensure that every meal will be a mouth-watering feast of delicious Indonesian and international favourites.

Sali Bay Diving around Sali Bay is incredible. The remote location offers exclusivity on dive sites and opportunity for exploratory diving, in addition to the 50+ dive sites which have already been mapped. Expect an immense biodiversity of marine life amongst the prison coral reefs, on the muck sites and out in the blue. Big schools of large fish, reef sharks and plenty of critters, they’re are all represented in this remote region at the heart of the Coral Triangle. The house reef is suitable for both divers and snorkellers. The colours and wealth of marine life here is exceptional, plus you have a very good chance of seeing large tuna and pods of dolphins, as well as several species of whale. It is literally a paradise for divers. Lembeh Strait Lembeh Strait is undoubtedly a special place in terms of diving. What is considered rare elsewhere is relatively common here, including critters such as hairy frogfish, mimic octopus, devilfish, flamboyant cuttlefish, ghost pipefish, pygmy seahorses and much much more.

There is a tremendous variety of marine life, with every dive offering an opportunity to find a species new to science. There’s something here for everyone, even the most jaded of divers.

Flights are with Singapore airlines to Singapore, followed by internal flights to Manado and Ternate. On the return to Manado, the holiday will continue with 3 nights on the Lembeh Strait. The boat transfer to Sali bay resort is 50 minutes. Transport to London Heathrow will be available from Cheltenham and Gloucester, if there is sufficient demand.

Previous
Next
Back to Holidays

This website uses cookies to improve your experience while you navigate through the website. Out of these cookies, the cookies that are categorized as necessary are stored on your browser as they are essential for the working of basic functionalities of the website. We also use third-party cookies that help us analyze and understand how you use this website. These cookies will be stored in your browser only with your consent. You also have the option to opt-out of these cookies. But opting out of some of these cookies may have an effect on your browsing experience.
Necessary Always Enabled
Necessary cookies are absolutely essential for the website to function properly. This category only includes cookies that ensures basic functionalities and security features of the website. These cookies do not store any personal information.
Non-necessary
Any cookies that may not be particularly necessary for the website to function and is used specifically to collect user personal data via analytics, ads, other embedded contents are termed as non-necessary cookies. It is mandatory to procure user consent prior to running these cookies on your website.
SAVE & ACCEPT